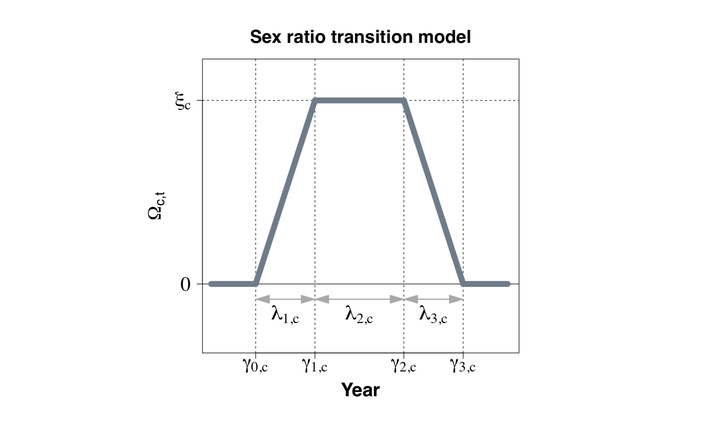 The sex ratio at birth (SRB) is defined as the ratio of male to female live births. The SRB imbalance in parts of the world over the past several decades is a direct consequence of sex-selective abortion, driven by the coexistence of son preference, readily available technology of prenatal sex determination and fertility decline. Estimation and projection of the degree of SRB imbalance is complicated because of variability in SRB reference levels and because of the uncertainty associated with SRB observations. We develop Bayesian hierarchical time series mixture models for SRB estimation and scenario-based projections for all countries from 1950 to 2100. We model the SRB regional and national reference levels and the fluctuation around national reference levels. We identify countries at risk of SRB imbalances and model both, (i) the absence or presence of sex ratio transitions in such countries and, if present, (ii) the transition process. The transition model of SRB imbalance captures three stages (increase, stagnation and convergence back to SRB baselines). The model identifies countries with statistical evidence of SRB inflation in a fully Bayesian approach. The scenario-based SRB projections are based on the sex ratio transition model with varying assumptions regarding the occurrence of a sex ratio transition in at-risk countries. Projections are used to quantify the future burden of missing female births due to sex-selective abortions under different scenarios.

Next
Web appendix for levels and trends in sex ratio at birth in provinces of Pakistan from 1980 to 2020 with scenario-based missing female birth projections to 2050: a Bayesian modeling approach
Previous
“Sex Ratio of Mortality Rate Estimation Using a Bayesian Modeling Approach