Projecting sex imbalances at birth at global, regional and national levels from 2021 to 2100: scenario-based Bayesian probabilistic projections of the sex ratio at birth and missing female births based on 3.26 billion birth records 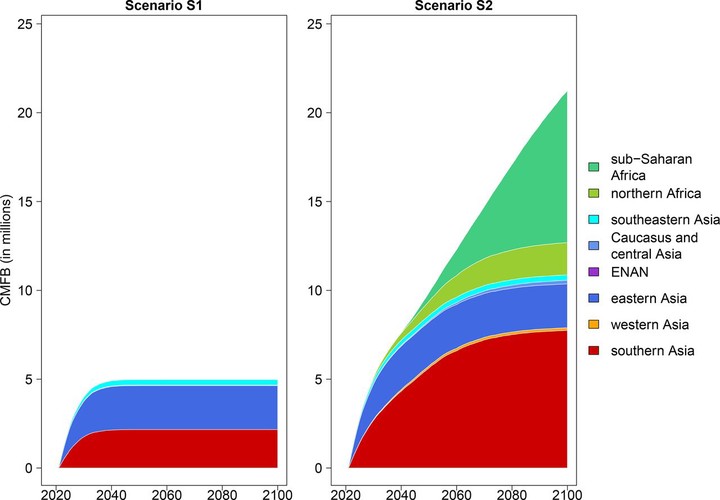 Skewed levels of the sex ratio at birth (SRB) due to sex-selective abortions have been observed in several countries since the 1970s. They will lead to long-term sex imbalances in more than one-third of the world’s population with yet unknown social and economic impacts on affected countries. Understanding the potential evolution of sex imbalances at birth is therefore essential for anticipating and planning for changing sex structures across the world. We produced probabilistic SRB projections from 2021 to 2100 based on different scenarios of sex ratio transition and assessed their implications in terms of missing female births at global, regional and national levels. Based on a comprehensive SRB database with 3.26 billion birth records, we project the skewed SRB and missing female births with a Bayesian hierarchical time series mixture model. The SRB projections under reference scenario S1 assumed SRB transitions only for countries with strong statistical evidence of SRB inflation, and the more extreme scenario S2 assumed a sex ratio transition for countries at risk of SRB inflation but with no or limited evidence of ongoing inflation. Under scenario S1, we projected 5.7 (95% uncertainty interval (1.2; 15.3)) million additional missing female births to occur by 2100. Countries affected will be those already affected in the past by imbalanced SRB, such as China and India. If all countries at risk of SRB inflation experience a sex ratio transition as in scenario S2, the projected missing female births increase to 22.1 (12.2; 39.8) million with a sizeable contribution of sub-Saharan Africa. The scenario-based projections provide important illustrations of the potential burden of future prenatal sex discrimination and the need to monitor SRBs in countries with son preference. Policy planning will be needed in the years to come to minimise future prenatal sex discrimination and its impact on social structures.